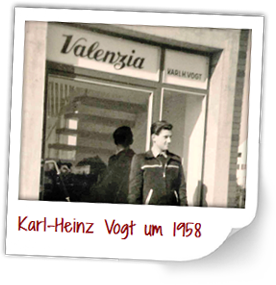 once upon a time …

… Karl-Heinrich Vogt, returning from the Second World War and hoping to make a fresh start, opened a fish shop with his wife Erna. Good ideas and the efforts of the entire family set the business on a solid course. To complement the fish, the business began offering lemon juice from Valencia in its own specially-developed packaging. Fruits, vegetables, and fruit juices were added in the years that followed. Preserved mushrooms for the retail market were included later on. Since then, Valenzi has been an unstoppable success story. Various soup additions were added to the company’s full assortment of wild berries. The company expanded and, in 1969, relocated to Suderburg, Germany.

… more than 50 years later, Valenzi holds a strong position in the international market. With flexibility, strong entrepreneurial instincts, and solid contacts worldwide, the company’s founder and his sons, Karl-Heinz and Klaus, have turned the family business into a modern company.

With its approximately 100 employees, Valenzi is today one of the region’s major employers. Experience, the most up-to-date expertise, high standards of quality, modern machinery, and dedicated employees continue to strengthen Valenzi‘s position as a market leader. Annual production of some 4 million kilograms of mushrooms, 2 million kilograms of fruit, and 700,000 kilograms of soup additions speaks for itself – not to mention the many awards honouring our various products and our certification to numerous national and international standards, all of which provide assurance of the high quality of our products.